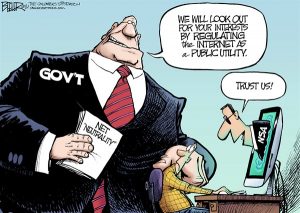 The main problem with the government regulating (and there are problems) is that they have to have access to to usage and details no one necessarily wants them to have access to review.  Some would argue that taxes are the biggest problem with this regulation.  If the government is taking a role, you can rest assured that they will eventually tax us for the consideration. Thus was born the argument against Net Neutrality.

What does it mean for the average consumer that the FCC Approved Net Neutrality?

To answer this we have to look at the root of the problem.  There once was a big internet provider company (Comcast) who came to understand that companies who need lots of internet (Netflix, amazon, etc)  might be a good money source.  Comcast tried to charge these companies more for usage than the rest of the world.  Of course there was some kickback from this.  It was decided somebody needed to regulate.  Who better than the federal government for the job, right?  Thus the idea of Net Neutrality was born.

So what Happened today?

The Federal Communications Commission on Thursday adopted sweeping new regulations sought by President Obama for how Americans use and do business on the Internet, in a party-line vote that is sure to be challenged by the broadband industry.

The commission, following a contentious meeting, voted 3-2 to adopt its so-called net neutrality plan — a proposal that remained secret in the run-up to the final vote.

On its surface, the plan is aimed at barring service providers from creating paid “fast lanes” on the Internet, which consumer advocates and Internet companies worry would edge out cash-strapped startups and smaller Internet-based businesses. Chairman Tom Wheeler said it would ensure an “open, unfettered network.”

But the rules, more broadly, would put the Internet in the same regulatory camp as the telephone by classifying it like a public utility, meaning providers like Comcast or Verizon would have to act in the “public interest” when providing a mobile connection to your home or phone.

Republican Commissioner Ajit Pai, who delivered some of the most scathing criticism of the plan Thursday, warned the policy represents a “monumental shift” to “government control of the Internet.”

So What Changed about the Internet?

No Throttling: Broadband providers may not impair or degrade lawful Internet traffic on the basis of content, applications, services, or non-harmful devices.

No Paid Prioritization: Broadband providers may not favor some lawful Internet traffic over other lawful traffic in exchange for consideration — in other words, no “fast lanes.” This rule also bans ISPs from prioritizing content and services of their affiliates.