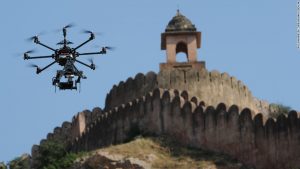 Flying Unmanned Aerial Systems (UAS), commonly called drones, for commercial use has been almost entirely banned in the United States, but Sunday morning’s announcement would change that.

“Today’s proposed rule is the next step in integrating unmanned aircraft systems into our nation’s airspace.” FAA Administrator Michael Huerta said in a conference call with reporters. “We are doing everything that we can to safely integrate these aircraft while ensuring that America remains the leader in aviation safety and technology.”

It’s important to note that this is only a proposal. If you want to fly your drone commercially, then you still have to wait until this rule becomes official. That process could take years.

Under the new FAA proposal, drones that weigh less than 55 pounds would be able to fly up to 500 feet above the ground at speeds up to 100 mph. Drone operators would have to obtain a special unmanned operating certificate, and follow a handful of restrictions, including keeping the drone within sight, and avoiding hazards like restricted airspace, people, airports and other planes.

Currently anyone wanting to operate a drone for commercial use (like us here at Rudtek!) had to get a difficult to obtain exemption from the FAA. We were not able to obtain one as no one at Rudtek has a pilot’s license.

More than two dozen of those exceptions have been granted since the first was awarded to energy giant BP and UAV manufacturer AeroVironment in June for aerial surveys in Alaska.

The new proposed rules are much less burdensome than what has been imposed as part of the exception process.

Additional FAA research is underway that could create different rules for drones smaller than 4.4 pounds, and allow for drone operation beyond the line of sight.

Rudtek, like many technology and photographic/video companies are excitedly waiting for news like this and we can’t wait until it’s official!