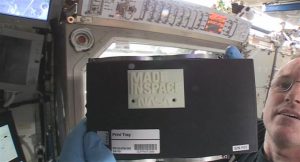 Pretty amazing where we are in technology right now!  Spacemen print their own spare parts!  So that’s not the actual headline, but it’s catchy, right?  What really happened is that NASA’s very own scientists used a 3D printer to print a spare part for their shuttle.

After a series of calibration tests, the first 3-D printer to fly to outer space has manufactured its first potentially useful object on the International Space Station: a replacement faceplate for its print head casing.

“An astronaut might be installing it on the printer,” said Aaron Kemmer, the chief executive officer of Made In Space, which built the 3-D printer for NASA’s use.

The 9.5-inch-wide contraption was delivered to the space station by a robotic SpaceX Dragon cargo ship in September, and NASA astronaut Butch Wilmore set it up inside the station’s experimental glovebox a week ago.

NASA astronaut Butch Wilmore, the International Space Station’s commander, holds up the first 3-D-printed part made in space. It’s a replacement print head faceplate, which holds internal wiring in place within the 3-D printer’s extruder. The faceplate, which bears the logos for Made in Space and NASA, measures roughly 3 by 1.5 inches (7.6 by 3.8 centimeters) with a thickness of a quarter-inch (6 millimeters).

Since then, the crew has been printing out plastic test patterns, or “coupons,” to check how the machine works in zero gravity. “Everything worked exactly as planned, maybe a little better than planned,” Kemmer told NBC News. He said only two calibration passes were needed in advance of the first honest-to-goodness print job, which finished up at 4:28 p.m. ET Monday and was pulled out of the box early Tuesday.

“It’s not only the first part printed in space, it’s really the first object truly manufactured off planet Earth,” Kemmer said. “Where there was not an object before, we essentially ‘teleported’ an object by sending the bits and having it made on the printer. It’s a big milestone, not only for NASA and Made In Space, but for humanity as a whole.”

Made In Space’s 3-D printer is similar to the earthly variety: A thin filament of ABS plastic is fed through the machine, melted and then extruded through the print head to build up the desired object, layer by thin layer. Over the course of hours, the printer’s computer program controls precisely where the squirts of plastic are directed.

The full story can be found here:  NBC 3D Printer in space.

1 thought on “Spaceship 3d prints its own spare parts”