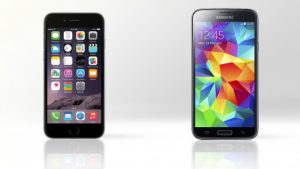 The guys over at Gizmag put together the following article that compares the features and specs of the iPhone 6 and Samsung Galaxy S5.

For the last few years, one of the most obvious differences between iPhone and Galaxy flagships was size. Now that Apple is finally catching up to the times and releasing a pair of bigger iPhones, how do the two rivals size up? Read on, as Gizmag compares the features and specs of the iPhone 6 and Samsung Galaxy S5.

The iPhone 6 is much bigger than any previous iPhone, but it’s still a bit smaller than the Galaxy S5. Samsung’s handset is about 3 percent taller and 9 percent wider than the new iPhone.

The iPhone 6 also continues Apple’s love affair with light mobile devices. It weighs in at 11 percent lighter than the Galaxy S5.

With the iPhone 6, Apple is continuing in the aluminum unibody direction that we first saw in the iPhone 5 two years ago.

The GS5 goes in a completely different direction, with a dimpled plastic finish that feels (but doesn’t necessarily look) a bit like faux leather. It may not carry the premium aura that aluminum does, but it is comfortable in hand.

Apple is sticking with the same three color options that it gave us with last year’s iPhone 5s.

The Galaxy S5 gives you about 18 percent more screen real estate than the iPhone does.

If the iPhone 6’s 4.7-in screen isn’t big enough for you, then you might want to look into the company’s (more expensive) 5.5-in phablet, the iPhone 6 Plus.

With Android phones rocking 1080p displays for nearly two years (and several moving into Quad HD land), it was hard to watch Apple’s Phil Schiller boasting about the iPhone 6’s 750p resolution (“more pixels than a 720p TV set”) at the launch event.

Apple has long claimed that 326 pixels per inch (PPI) passes the threshold where eyes can differentiate individual pixels. And while 326 PPI does look fairly crisp, my retinas can most definitely appreciate those extra pixels in 1080p and Quad HD displays.

… in other words, this is one category where the GS5 is the clear winner.

We’re looking at an IPS display on the iPhone 6, next to Super AMOLED for the GS5. AMOLED screens typically have richer colors and wider contrast, but we’ll have to wait for some extended hands-on time with the iPhone 6 before jumping to any conclusions on that front.

Apple’s Touch ID is back on the iPhone 6. While Samsung’s swipe-based fingerprint sensor is worth having, Apple’s touch-based sensor is faster and easier to use.

This is the first time Apple has put NFC in a new iPhone. Android phones have had NFC chips for years.

Apple is trying to replace your wallet with its new Apple Pay service. Owners of the new iPhones will be able to use the handsets to pay for goods at select retailers – without any private info being transmitted to the store.

None of them have really taken off, but Android has several compatible NFC-based payment options of its own. It will be interesting to see if services like Google Wallet and Soft Card (known as Isis before a terrorist group ruined that brand name) start picking up steam, now that Apple’s in the game.

Apple is advertising longer battery life in the iPhone 6 than we saw in the iPhone 5s, but the GS5 will be tough to beat in this category. When we put it through the paces, we were impressed with its uptimes.

If your battery life does dip down into the danger zone, Samsung has a terrific feature up its sleeve that can keep you on the grid. Ultra Power Saving Mode turns your screen black & white and severely limits available apps and processes to extend 10 percent battery life into 24 hours of uptime.

The Galaxy S5 and several of Sony’s recent phones are still the only major flagships with built-in water resistance. Its IP67 rating means it can sit in 1 m (3.3 ft) of water for half an hour without running into trouble.

There’s much more to camera quality than pixel counts, so we wouldn’t be too hasty with declaring the GS5 the “winner” of this round.

The Galaxy S5 does, however, have a terrific camera – despite its one Achilles’ heel of taking too damn long to start.

Both phones’ cameras can record 1080p video at 60 frames per second (fps).

The iPhone does, however, double the GS5’s frame rate when recording slow motion video.

Ah yes, we can’t forget storage. While most customers are content with base 16 GB options, this is the first time that Apple has offered a 128 GB iPhone model.

The Galaxy S5 does helps its storage cause, though, by letting you pop in a microSD card (up to 128 GB).

Apple usually doesn’t delve too much into processor specs at its launch events, so we don’t yet know the clock speed of the 64-bit Apple A8.

We also don’t yet know how much RAM the iPhone 6 carries, but the smart money is on 1 GB.

Samsung gets the most out of the Galaxy S5’s 2 GB of RAM by adding a side-by-side multitasking feature, known as Multi Window. No iOS devices have anything like that at the moment.

Now that Apple has moved into the realm of big phones, it needs to acknowledge some of their potential pitfalls. So, similar to features we’ve seen on Android phones, Apple has added a one-handed mode.

Apple calls its one-handed mode “Reachability.” By double-tapping the home button, the top of the screen slides down to the bottom, so you can easily tap top-level navigation targets. That doesn’t address the problem of one-handed typing, but perhaps some third-party iOS 8 keyboards will.

Samsung’s one-handed mode activates with a swipe gesture, and shrinks the entire screen – keyboard and all – down to a one-hand-friendly size.

The GS5 has a dedicated heart rate monitor on its backside. The iPhone doesn’t have any pulse sensing hardware, but there are iOS apps that can read your pulse using the camera and flash.

The Galaxy S5 has an IR blaster, so you can use your phone as a remote control for your TV or cable/satellite box.

The iPhone 6 will launch alongside iOS 8. The GS5 runs Android 4.4 KitKat at its core, with Samsung’s in-your-face TouchWiz UI living on top.

The iPhone starts shipping to nine countries on September 19. The GS5 first launched back in April.

We’re looking at the same US$650 full retail price for both phones. But if you keep your peepers peeled, you might be able to find discounts on the five-month-old GS5.

If you live in the US, then you’re more likely to see pricing that looks like this (after signing a two-year blood oath with the carrier of your choice). Here the two flagships are also tied up.